below are package-links that can be installed by browser in the following format:
https://{org domain}/packaging/installPackage.apexp?p0={packageAlias}.
This document will be updated by every major release date.

This package can be installed from scratch or can be upgraded starting from version 0.27.

The following groups in the graph: "Nps Rating Distribution v2" now have their correct color:

case surveys are now more stable. Rare cases occured where campaign id was not found, even when process builder was setup correct.

Timeout limit for full resync or sync is now limited to 30 seconds instead of 10. The reason is that in some rare cases a timeout error would appear. 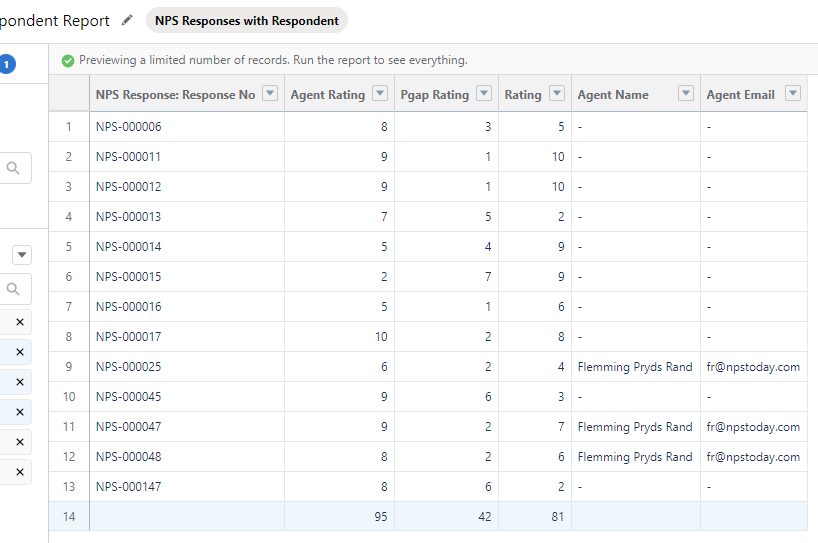 Added an alternative to using the case panel for sending embed surveys.

The image below demonstrates how an embed survey could look like:

When receiving the survey, it would then look like this: 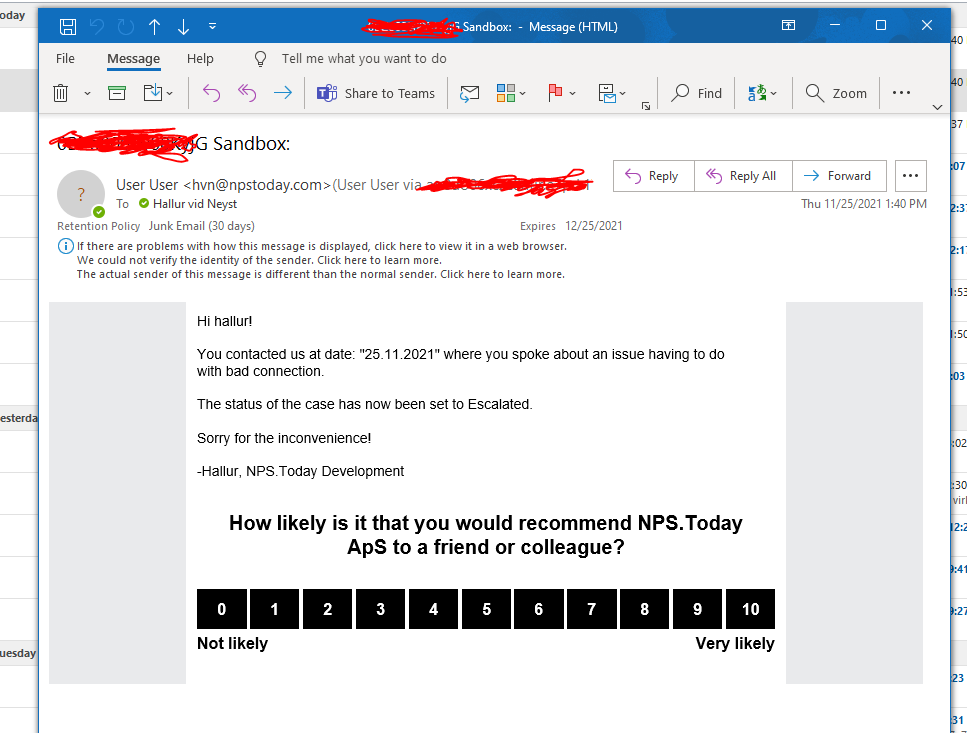 When sending embed survey on a case, you will need to give the name of the email template as well in the process builder. Example screenshot where email template name is "embed" is shown below.

New tab has been added containing a page with the html code needed for embedding a survey. The page contains a button that copies the code to the clipboard. Example picture is below.

Embedded surveys use Salesforce as an email service. To activate embed surveys on cases, toggle "use salesforce email template" as demonstrated in the gif below. The email limit for a licensed Salesforce Org is 5000 per day.

fixed an issue where rating 0 was not recognized as a detractor. This resulted in a wrong nps score.

It's now possible for an admin to change the default rule of only sending survey when closing a case. As demonstrated in the GIF below the admin needs to:

Atleast one status is required in the rules for sending surveys.

New Apex Variables have been added to the Process Builder in order to make it easier for the user to send essential Salesforce data to NPS.Today:

There are 3 new Apex Variables:

The old graphs are the following:

The new graphs are the following:

The advantage of the new graphs mostly is due to an improved version of NPS Rating Trend. The new graph makes it possible to choose different timelines such as “all time”, “last 6 months”, “last 3 months”, “last month”, and “last week”. It is also possible to pin the timeline on an account or contact page. In the future, these will become our default NPS graphs in Salesforce. In the screenshot below, the pin for the trending chart is highlighted in yellow. Click on it to unpin and then pin a specific timeline for the account or contact. The screenshot shows the new three graphs. 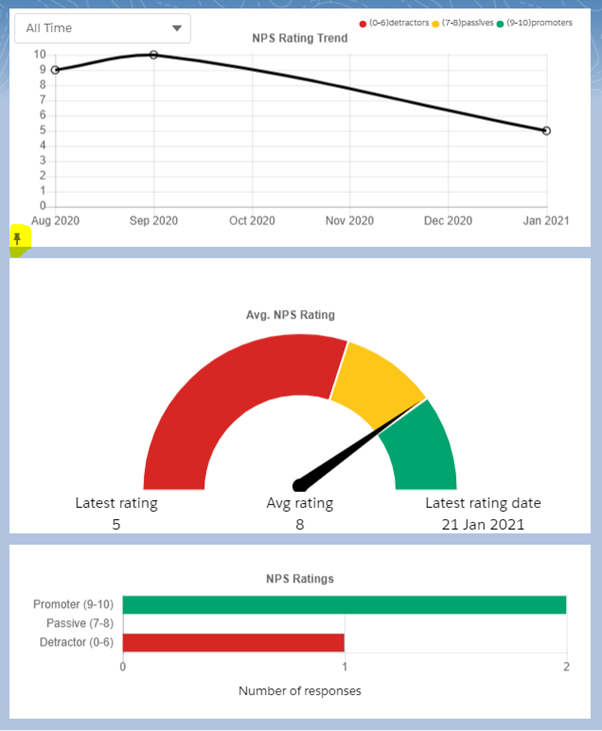 P-Gap is an estimation between an inexperienced employee and a customer. The Employee estimates how satisfied the customer is after closing the case. The estimation result is given as an NPS rating (0-10).

A modal pops up prompting the employee to give an agent rating for the case. As an admin, you can customize the p-gap modal being shown to users who are in p-gap periods. The easiest way of doing this is by going to a case (no specific case) and click on customize p-gap modal. :

This will bring up the modal in a customizable mode. The admin is then able to do the following:

When you are done customizing, click apply changes and exit afterwards. These changes will be saved in “NPS.Today settings”. 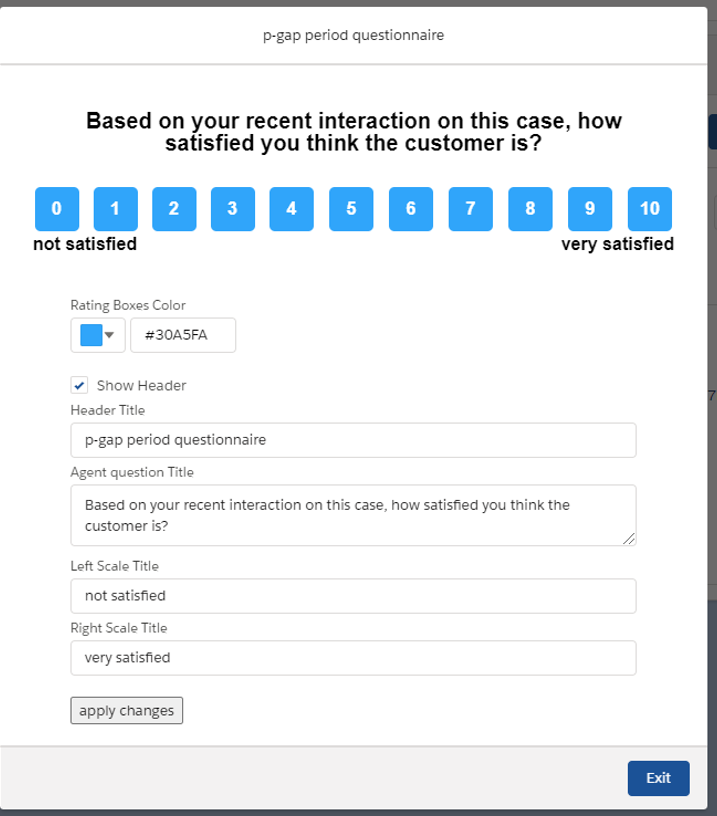 If the user who is logged in (not the case owner) is in a p-gap period for the nps.today campaign, a popup should appear instead like so: 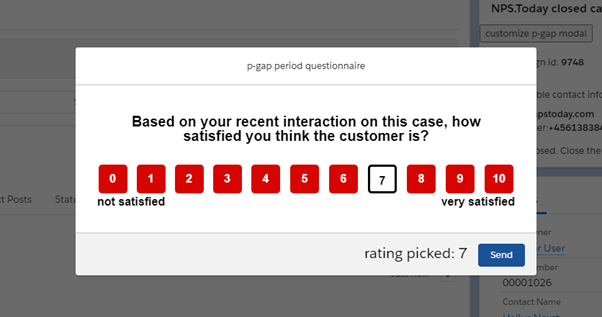